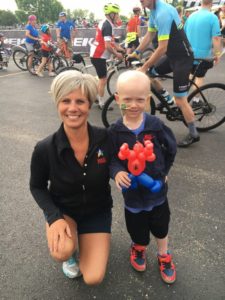 The MACC Fund is going big in its fight against pediatric cancer and blood disorders.

The Midwest Athletes Against Childhood Cancer will announce Wednesday that it is pledging $25 million to the Medical College of Wisconsin and Children’s Hospital of Wisconsin to accelerate medical research.

The contribution will be made over seven years beginning in 2020.

It’s the largest pledge in the organization’s history. Since its founding in 1976, the MACC Fund has contributed more than $65 million for cancer research.

The pledge comes as Becky Pinter embarks on her first year as president and chief executive officer of the organization.

“This has been in the works for quite some time,” Pinter said in an interview. “We’re moving into a new era.”

Through its history, the MACC Fund has relied on fundraisers, including the annual TREK 100 Ride for Hope and a biannual golf outing sponsored by West Bend Mutual Insurance Co.

The organization is also trying to get its message out across the state, Pinter said.

“We provide money for research,” she said.

John Raymond, president and chief executive officer of the Medical College of Wisconsin, said his organization was “inspired and grateful for this generous commitment and legacy of partnership from the MACC Fund.”

“Their pledge will enable our researchers to continue to drive innovation and push technology to advance the next revolution in therapies that will enable the best possible outcomes for kids.”

Peggy Troy, president and chief executive officer of Children’s Hospital of Wisconsin, said: “Kids battling cancer in Wisconsin wouldn’t have access to the best possible care if it wasn’t for the generous support of donors and advocates that support the MACC Fund.”

According to the MACC Fund, the partnership with Medical College of Wisconsin and Children’s Hospital of Wisconsin “helps accelerate research and increase the number and types of clinical trials.”

The two hospitals “are rapidly becoming a national leader in pediatric immunotherapy — a novel way of treating cancer that is less invasive or toxic than traditional chemotherapies,” the fund said.

“With this commitment, the team is seeking new methods for optimal healthcare delivery, such as psychosocial support and telehealth to stay connected to kids and families even years after treatment,” the fund said.

One of those helped by a clinical trial was Raphael Ordan, who was diagnosed 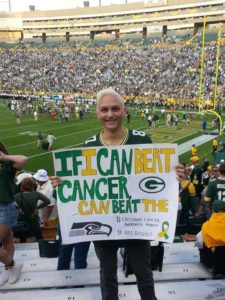 with stage 4 Hodgkin lymphoma in 2017. He is now cancer-free.

In a statement, Ordan, 19, said: “I believe in the power of prayer and paired with the innovation and research of Children’s Hospital, the Medical College of Wisconsin and the MACC Fund, after only two cycles of therapy with a trial treatment, my cancer was gone. I always like helping people and now because of this successful trial, thousands of kids will have an easier time beating cancer.”

“From the very beginning, our whole experience with Children’s and the MACC Fund, we felt we were in good hands,” said Ordan, chief executive officer of Eisenhower Center, which provides vocational training and employment services for adults with disabilities. “We never once felt that we were not taken care of. They told us they were going to cure him and they cured him. You don’t get a better outcome than that.”