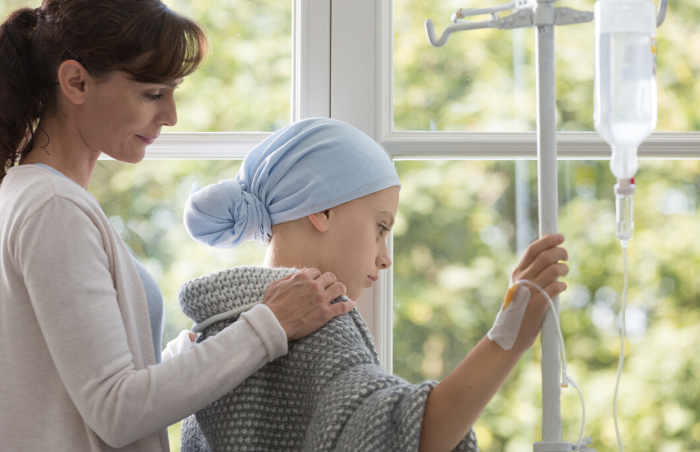 There are many kinds of chemotherapy, each used to treat a different form of cancer or type of tumor. Chemotherapy works by interfering with the cancer cell’s ability to grow or reproduce. Often chemotherapy is used in combination with other forms of treatment such as drugs, radiation or surgery. Certain chemotherapy drugs may be given in a specific order, depending on the type of cancer it is being used to treat. Here are three common types used in childhood cancer treatment plans:

Immunotherapy: This is a form of chemotherapy that uses the immune system to fight cancer. This may be used in combination with other cancer treatments to decrease side effects or improve its effectiveness.

Traditional chemotherapy: These are cancer drugs that also tend to affect normal cells, causing many of the side effects of treatment. They work in many ways, including competing with cancer cells for nutrients.

While chemotherapy is often depicted on TV as an injection, that is not the only way that the drug can be delivered. Chemotherapy can be given orally as a liquid or pill as well as an injection. To protect the patient’s healthy cells, chemotherapy is given in cycles. Cycles include days of treatment followed by several days off treatment, which enables the drug to kill more cancer cells. Many children tend to prefer oral chemotherapy as it allows them to remain at home and avoid the more traumatic experience of the doctor’s office that they often fear. It also has the added benefit of reducing travel, as many children receiving chemotherapy in Wisconsin may live far away from hospitals where they are treated like Children’s Wisconsin and UW Carbone Cancer Center.

Side Effects of Treatment

However, there are also many sides effects as a result of chemotherapy treatment. In order to kill off cancer cells, the treatment can also damage healthy tissue and other parts of the body. The side effects depend upon the type of chemotherapy and the patient’s body. Unfortunately, because children’s bodies are not yet fully grown, the side effects tend to be more concerning.

Children face increased risk of infections and lowered blood counts as well as effects later in life. Childhood cancer survivors often face vision problems, heart defects, and fertility issues that may not appear until years later. Parents of survivors must face the fear of the unknown as their child continues to grow.

Childhood cancer researchers are constantly attempting to find more treatments that are both more effective and safer for the children they are used to help. The goal of the MACC Fund is to find a way for children to become cancer survivors, but to also enjoy a long, healthy life. No child should fear the future, particularly after the battle that they have already faced. Join us in our fight to create a world where every child has a chance to dream and a chance to grow. Donate today.