April 28th is National Superheroes’ Day, and if there’s one thing that we know for sure, it’s that children battling childhood cancer and related blood disorders are true superheroes. In honor of this day and their ongoing fight, we wanted to share the story of one young hero. 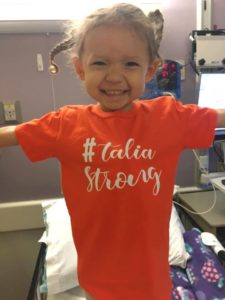 Talia had just turned three when her parents noticed blood in her urine. Concerned, they called their pediatrician and took her to urgent care. Talia was diagnosed with a bladder infection and sent home with antibiotics. Thinking that was the end of it, her parents were surprised when they received a call a few days later from their pediatrician. The culture from Talia’s test had come back and it showed that it was not a bladder infection, it was something much worse.

During an initial exam, the pediatrician didn’t find anything unusual but ordered an ultrasound to find out more. The ultrasound revealed a mass on Talia’s left kidney; she had Wilms Tumor. The Hernandez family was immediately sent to Children’s Wisconsin, and Talia was admitted as a patient. Within a few hours of arriving, the Hernandez family was introduced to their team of doctors, which included a surgeon, urologist, and oncologist.

During her treatment, Talia’s right kidney and 10 cm Wilms Tumor was removed. Her mom, Heidi, remembers how quickly everything happened. “There was not enough time to comprehend what was going on, or to prepare for what was ahead of us”, Heidi said.

Following her surgery, Talia was diagnosed with Stage 3 kidney cancer; she began six rounds of radiation treatment and 25 weeks of chemotherapy. After each of her weekly treatments, Talia would be tired and feel sick, but Heidi feels grateful that Talia didn’t have more serious issues as a result of her treatment. “We were so lucky that Talia only had to visit the ER once for a high fever”, Heidi reflected. “Throughout her radiation and chemotherapy, she was still such a spunky and smiley three-year old!” 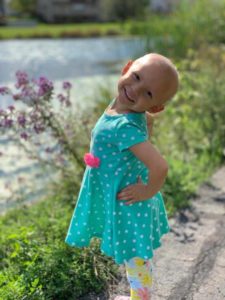 Each Day is a Gift

Talia and her family are so grateful for the love and care they received at Children’s Hospital, as well as the support they received from their friends and family. Many of them brought meals to the family, cared for Talia’s siblings, started prayer chains, invited her to be part of a parade and donated toys to give back to the toy closets at Children’s Wisconsin.

Talia completed her treatment at the end of September, just one week before becoming a big sister. Despite the difficult times, Heidi tries to see the positive side. “We may not have chosen Talia’s diagnosis, but it definitely changed how we choose to look see each day as a gift and how we choose to forever support childhood cancer awareness.”

Talia’s story was submitted by her mother, Heidi Hernandez. To share your experience with childhood cancer or a related blood disorder, please email dtorgerson@maccfund.org