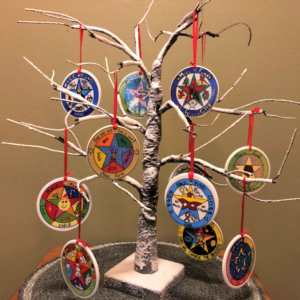 Chris Anderson will never forget the day in 2008 when she purchased her very first MACC*Star ornament. She was instantly drawn to the beautiful artwork and the theme of “Life is a Gift”. Chris also learned that she would be supporting something bigger with her purchase: research into childhood cancer and related blood disorders something that was very meaningful to Chris and her family.

Chris’ family had become very familiar with Children’s Wisconsin and the MACC Fund Clinic. Her son, Ricky, was diagnosed with a bleeding disorder called Von Willebrand disease, which is a clotting disorder. Ricky was also found to have another disorder, which at the time was called “hemolytic anemia”. As a result his liver and spleen were enlarged, he bruised easily, and he had no energy. “Ricky spent many days in and out of the Hematology/Oncology/Transplant (HOT) unit”, Chris told us. “He met other kids on the unit who were dealing with various life-threatening conditions. He developed great friendships and he and our whole family were greatly affected by these patients. He also developed a very special bond with his Hematologist, Dr. Joan Gill.”

Research That Makes a Difference

Thankfully, there was ongoing research and specialists working to discover the underlying cause of Ricky’s symptoms. After many years of endless blood tests, bone marrow aspirates, a partial splenectomy to control his blood loss, blood transfusions, frequent ER visits and inpatient stays, a diagnosis of ALPS (Autoimmune Lymphoproliferative Syndrome) was confirmed in 2009 when Ricky was 15 years old. ALPS is a condition that destroys healthy blood cells. This means that although Ricky has a healthy immune system, his body continues to destroy healthy white blood cells, red blood cells and platelets. It is unclear what viruses trigger this ALPS response.

Chris is thankful for the ongoing research that enables Ricky to live his life. “Through the MACC fund and collaboration with researchers around the country, Ricky is able to live a functional healthy life and understand the challenges when an unexpected virus triggers his ALPS. Ricky is now 27 years old, doing well and is part of the natural history program at the National Institutes of Health in Bethesda Maryland.”

Chris continues to collect MACC*Stars ever since that memorable day in 2008.