June 21, 2013 was just another Friday. Our girls were into their summer break and I was hard at work.  Shortly before lunch, my teammates informed me that my wife was trying to get in contact with me and I needed to call right away. This was all weird, as text messaging was common, and we rarely talked over the phone. Once I reached her, the last thing I ever expected to hear was “Ryan, I need you to come to the doctor right away…she thinks Lily has Leukemia.” Admittedly, I was a bit unaware of the magnitude tied to those words. The doctor immediately sent us down to Children’s Hospital for further evaluation.  At that very moment, our lives changed forever. 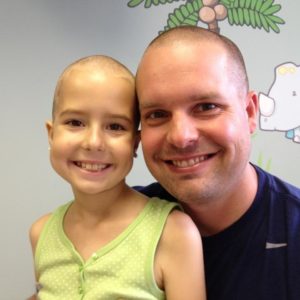 The ride down to the hospital is a moment I will never forget. The song “Cups”, by Anna Kendrick, was playing on the radio. Our eight-year-old daughter, unaware of what was going on, was singing along word by word. “…you’re going to miss me when I’m gone…” continued to come out of her mouth. It took every grain of strength I had to not immediately break down from the worry those words caused.

Everything tied to Lily’s treatment was new to us. The surgeries, medical equipment, medicines, protective gear for chemo setup, and sounds of a hospital room became normal. Beautiful bald heads, steroid cheeks, vomiting from sedation and chemo, and late-night fevers became the norm. 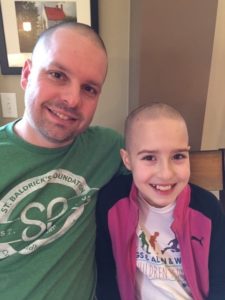 On 3/7/2015, just a few months before Lily’s end of treatment celebration, we heard these same words again. “Ryan, we need to go to Children’s Hospital…. Bailey has Leukemia.” Having been a bit of a veteran now in the battle of cancer, the fears were different. We knew what was likely to happen.  This was probably scarier than learning through Lily’s experience. Bailey, having been high-risk due to her age and white cell counts at diagnosis, had to endure more treatment. She had a rough time. Having to fight anxiety and food aversion caused by medicine tastes in her mouth, she lost a significant amount of weight. Feeding your child through a pump was never something we thought we would endure.  Being admitted to the ICU due to a severe infection in her intestines, which is only caused by treatments from cancer, could have broken Bailey, but she continued to fight with such grace and determination. On 6/26/2017, she rang the bell, indicating the end of treatment.

We constantly hear how strong our family was through all of this. The reality is that we really had no other choice. Our strength is often an external face. Internally we worry about every muscle ache, sore bone, bloody nose, headache, and common fever. Erin and I would both admit that we struggle with PTSD from our children’s battle. Certain music, the smell of hand sanitizer, and being inside Children’s Wisconsin bring back all the memories tied to these five long years of cancer treatment. We struggle to be happy that our children are strong and growing young ladies, when others in our situation have lost their beautiful children.

Our only choice is to continue being a strong voice in the world of childhood cancer. You’ll see us at many MACC Fund related fund raisers, like Brian Gotter’s Bowling for MACC, The Trek 100, Back the MACC Golf outing at the Bog, and social media. Like many of the doctors we talk with, we firmly believe that the cure for some of these cancers has never been closer. We hope to be around to celebrate the day this happens.