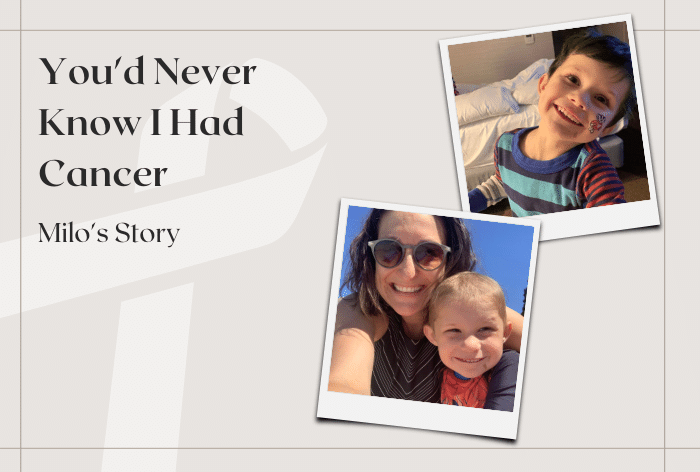 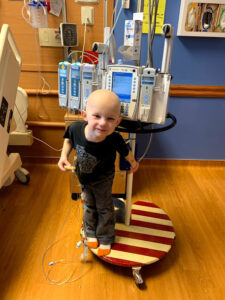 Three-year-old Milo (the youngest of three children) came down with a cold in August 2019 and the lymph nodes in his neck began to swell. His mother, Sina, just assumed that it was a result of the cold, maybe strep, or worse case, mononucleosis. Yet three months later the swelling not only didn’t go away but grew even larger. After months of monitoring, antibiotics, ultrasounds, and blood draws (which all appeared normal including his tumor markers) the family’s pediatrician called to tell them that the biopsy results came back, and it wasn’t good news. Milo’s results showed that he had Diffuse Large B Cell Lymphoma.

Milo began treatment the week after Christmas, where he underwent tests and planning for chemotherapy and learned that he had stage 3 lymphoma both in his neck and kidney. Sina was amazed by his positivity through it all. “From the beginning, this small human was a miracle to watch. We tried to make it less scary. Telling him he got to go on a rollercoaster when he had chest x rays (because you sit in a chair with your arms up). We called CT scans and MRI’s rocket ship rides.” His family and doctors gave him the nickname Hulk because there was no better superhero to personify Milo’s strength and courage than the big, green giant.

Due to the severity of his cancer, Milo was dosed with multiple chemotherapy drugs. He went to the operating room 11 times for surgeries, line placements, line replacements and lumbar punctures, yet he still managed to smile every day. He’s been bald, had a central line, dressing changes, shots, ECHOs, scans, chemo, and slept in a hospital for 28 nights yet still managed to brighten his family’s days. 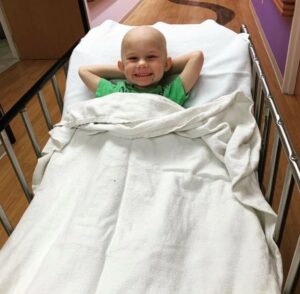 Milo just turned 5-years-old and is officially one year cancer free. “He is back to running around the playground. He learned how to ride a two-wheel bike and he hikes like a boss. Yet he’s different too. He gets tired more quickly. He still complains of his legs hurting or being sore and he has taken longer to learn his kindergarten information. I know that he is at risk for life-long side effects from his cancer treatment”, Sina reflects. Today, no one would look at Milo and know that he had cancer, but it has changed his life and the lives of his mother, father, and sisters in untold ways.

Their family will never be the same, but Milo’s mother tells us that they are better for having gone through what they did. It has brought them closer together, made them stronger, and helped them remain positive regardless of the obstacles. “The days were long and hard, but the experience changed us forever for the better.”

Read more about Milo and his mother Sina in her Mother’s Day blog Same, Same but Different.