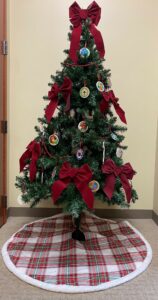 Our President & CEO, Becky Pinter, has her own holiday tradition with the TMJ4 MACC*Stars. Here’s what she had to say about what it means to her:

“I am so blessed to be part of the MACC Fund for so many years.  I started collecting MACC*Stars in the early 1990’s when I first started volunteering for the MACC Fund.  I learned so much about the MACC Fund in the first few months of volunteering – but kept hearing about something called the MACC*Star.  After learning more about it and hearing the powerful stories of Hope that go along with each MACC*Star, I started to buy one each year.

The Christmas spirit starts to come alive in the house the day after Thanksgiving.  Every time I look at the MACC*Stars on the tree, I put the faces, names, and stories of those who battle.  We remember those we have lost and honor those who continue to fight.   The MACC*Star reminds all of us that there is HOPE, love, friendship, and sorrow.  The MACC Fund continues to raise money to help find a cure for pediatric cancer and related blood disorders.  Grateful that I can pour my heart and soul into what I do for all of the families and children; and for all the doctors, nurses and researchers.”

Amy Vaught was young when a little girl she babysat for passed away due to a brain tumor; this early loss remained with her. In college she became involved with the MACC Fund and Women for MACC through an advisor on the University of Wisconsin-Whitewater campus, volunteering at various events like Pasta Fest. Amy received her first MACC Star in 1991 from the same advisor and it became a family tradition to give stars to start the holiday season. Her father then built her this tree, which they lovingly named the Charlie Brown tree, to display her ornaments each year. She has every star from 1991 to 2019 and it’s the first decoration to go up in her house every year! 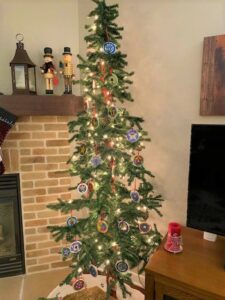 Erin was gifted her very first MACC Star in 2013, the very same year that her daughter Lily was diagnosed with cancer. From that point on, Erin became a collector. Her daughter, Lily, even designed the 2014 MACC Star. Every year, Erin would buy stars as gifts for others and her children were gifted stars by St. Nick. When her daughter Bailey was diagnosed and became the 2016 designer, Erin decided that she wanted to finish her collection. Now, she has almost every star! Erin loves that one day her daughters will be able to put up a MACC Star tree with their own collection. 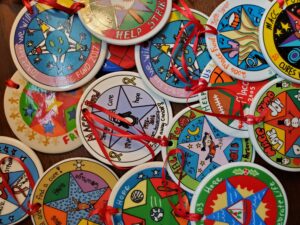 Mandy received her first TMJ4 MACC*Star as a Christmas gift “from” her infant nephew. She loved the idea of gift giving for a cause and began learning more about the MACC Fund’s fight against childhood cancer & related blood disorders. “What I think is so amazing about the MACC*Stars is that it is not just raising awareness but highlighting the real kids going through this. I can only imagine the joy that a child with so much heaviness in their current life would have when selected as the yearly artist! It puts a real face to the disease.”

After that first star, Mandy began to purchase stars for loved ones. Almost every Christmas for the last 20 years, Mandy has gotten a star from her nephew and sister. She loves that she’ll be able to pass the tradition down to her girls, who love unpacking the MACC*Stars and putting them on the tree each year! 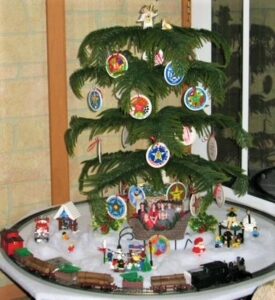 Sarah Forshee shared this story from her Grandmother who collects MACC Stars each year after her son, Darrel was diagnosed with cancer.

“Darrel was 16 years old when he was diagnosed with 4th stage Hodgkin’s. He underwent chemotherapy and radiation for 5 years and was declared cancer free. In 1989, he was diagnosed with Leukemia. Darrel had more chemotherapy and then a bone marrow transplant. Although the transplant seemed to be a success, Darrel unfortunately developed a brain fever and died in 1990 at the age of 21.

We began collecting MACC Stars in 1989. That year we only purchase one star. In 1990 after Darrel passed away and our daughter got married, we began purchasing three stars each year.”

Sarah never met her Uncle Darrel, but her family remembers him by purchasing MACC Stars each year. Her grandparents now have a tree dedicated to solely MACC Stars in his memory.

Carolyn’s husband loves sports and sports memorabilia. When he worked in Elm Grove at Bishop’s Woods in 1988, the MACC Fund was there. Carolyn’s husband learned more about our organization and bought her very first MACC*Star. Carolyn loves everything to do with Christmas and the MACC*Star tradition was right up her alley. Carolyn began collecting and gifting stars to her 5 children, carrying on the tradition. She hangs the MACC*Stars each holiday season in order by year in a doorway, and as you can see, she’s starting to run out of room!

Two of Jeff and Teri’s granddaughters were diagnosed with cancer in different years. To share what the stars mean to them, they wrote this beautiful poem.

My MACC Star tree is missing only a few 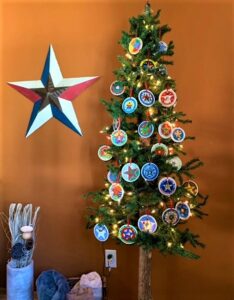 The years 1990, 2000 and 1992
I would like to hear their stories for sure
For those stars too have helped to find a cure
I read the ornaments and would like to know
Were these kids able to grow and grow
I bought my first star in 2013
The year of a diagnosis totally unforeseen
Our Granddaughter Lily with A.L.L.
The treatments were difficult, only time will tell
2014 she designed The Star
Her drawing skills surpassed mine by far
In 2015 we got bad news again
Her twin sister Bailey got A.L.L. at age ten
The treatment for her was even harder
She persevered and we couldn’t be prouder
1976 is when the MACC Stars began
Bailey’s 2016 design has a moustache on a penguin
So I’ll buy a Star every year for sure
In hopes that one day there will be a cure